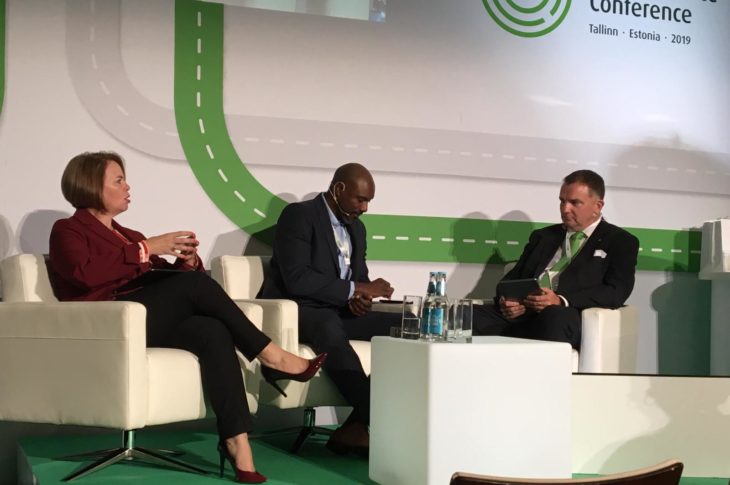 Oranjestad, Aruba—June 2019 —In May 2019, Prime Minister Evelyn Wever-Croes was invited to speak at the ‘e-Governance conference’ in Tallin, Estonia. During the two-day event, leaders from across the globe gathered to discuss innovation within government. Prime Minister Wever-Croes shared her vision for innovation and digitalization within the Aruban government. She also participated as a panelist in the ‘Benefits of Cooperation for Small Countries’ discussion which touched on the partnership between Aruba and Estonia in developing an e-Government roadmap.

The 5thannual e-Governance Conference was hosted by the government of Estonia to share their e-Government experience with other nations. According to the American publication Wired “Estonia is the most advanced digital society in the world.” The focus of this year’s conference was digital transformation roadmaps, which governments are implementing to achieve their digital and development goals.

Aruba started the eGovernment process in mid-2018 and has worked closely with the eGovernment Academy of Estonia to develop a road map. eGovernment will help Aruba streamline processes, structures, increase transparency and fight corruption. Currently, the administration is finalizing a ‘road-map’ to define the steps that need to be taken to achieve digitalization within government.

During the panel discussion the Prime Minister spoke about Aruba, its people and successes, and the determination of the Government of Aruba to improve the quality of life of the citizens.

Prime Minister Wever-Croes stated, “eGovernment would result in less bureaucracy, more transparency and better service for our community. These are the points that our government is prioritizing.”

During her trip to Estonia, the Prime Minister also met with several members of the Estonian government to gain a deeper understanding of Estonia’s eGovernment journey and the key priorities involved in the eGovernment implementation process. She also visited with the Kingdom of the Netherlands Ambassador in Estonia Mrs. Karen van Stegeren at the Residency.

The presence of Prime Minister Evelyn-Croes on this world stage could open opportunities for Aruba to cooperate with more countries on eGovernance, which could accelerate Aruba’s vision. The Prime Minister expressed that it is small islands such as Aruba that are most in need of assistance from international organizations such as the United Nations and European Union. E-government is essential in creating a sustainable and resilient society, and one that is prepared for anything.